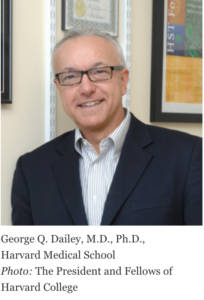 taking on a new challenge—unifying the powerful hospitals that train Harvard’s medical students.
Daley will assume the position effective Jan. 1, 2017, succeeding Jeffrey Flier, MD, who stepped down July 31st. Barbara McNeil, MD, the founding head of the Department of Health Care Policy at Harvard Medical School, is filling the position in the interim.
The internationally recognized leader in stem cell science and cancer biology and a longtime member of the Harvard Medical School (HMS) faculty whose work includes the fields of basic science and clinical medicine, Daley was the driving force behind creating international guidelines around first, human embryonic stem cell research, and then the clinical application of stem cells, according to Nancy Witty, CEO of the International Society for Stem Cell Research (ISSCR).
Daley, who cofounded the organization, counseled two dozen scientists through the sensitive ethical discussions involved in establishing stem cell research guidelines, utilized additional input from 60 groups around the world to construct the guidelines which were first published by the National Institute of Health in 2009.
“That’s a very difficult task,” Witty said. “It takes a tremendous amount of diplomacy.”

Daley is working to adapt insights in stem cell research to improved therapies for genetic and malignant diseases. Important research contributions from his laboratory at Harvard-affiliated Boston Children’s Hospital include the development of customized stem cells to treat genetic immune deficiency in a mouse model (in collaboration with Rudolf Jaenisch, a Professor of Biology at MIT); the differentiation of germ cells from embryonic stem cells (cited as a “Top Ten Breakthrough” by Science magazine in 2003), and the generation of disease-specific pluripotent stem cells by direct reprogramming of human fibroblasts (cited in the “Breakthrough of the Year” issue of Science magazine in 2008).
As a graduate student working with Nobel laureate Dr. David Baltimore, Daley demonstrated that the BCR/ABL oncogene induces chronic myeloid leukemia (CML) in a mouse model, which validated BCR/ABL as a target for drug blockade and encouraged the development of imatinib (GleevecTM; Novartis), a revolutionary magic-bullet chemotherapy that induces remissions in virtually every CML patient. Dr. Daley’s recent studies have clarified mechanisms of Gleevec resistance and informed novel combination chemotherapeutic regimens.
Daley has spent his entire career in Cambridge and Boston, earning a medical degree from Harvard and a PhD in biology from MIT. As Dean of Harvard Med School, Daley’s achievements in stem cell research is expected to shine a distinguished light on the stem cell industry.
Although the position of dean of Harvard Med may be one of the most prominent roles in medicine, the position is not as powerful it might seem: Harvard Med does not directly oversee any hospitals. Instead it relies on 15 affiliated hospitals and clinical sites, which have historically operated as separate, competitive bailiwicks, to train its students and postdoctoral fellows, and support its researchers. Only 151 of the nearly 12,000 people who call themselves Harvard Medical faculty actually work directly for Harvard in its 10 basic science departments.
Daley sees his new position as a congregator who “builds bridges among the institutions” —heavyweight research institutions such as Brigham and Women’s, Massachusetts General, and Boston Children’s hospitals. Persuasiveness, rather than power, is all that Daley says is needed to achieve an alliance.
Daley’s predecessor, Flier, says he spent a full 30 percent to 40 percent of his time as dean trying to build relationships with and coordinate Harvard’s affiliated hospitals and clinics, a challenge Daley says he’s up to. He has a head start in building those relationships through the many positions he has held around Boston’s biomedical community, including chief resident at Mass. General
“My vision is one of increasing connectivity across the community,” Daley says.
Currently a professor of biological chemistry and molecular pharmacology at Harvard Medical School and director of the stem cell transplantation program at Boston Children’s and Dana-Farber Cancer Institute, Daley sees areas of common interest, such as immuno-oncology, which harnesses the body’s own immune system against cancer cells, where the hospitals can work more closely together.
Described by colleagues as a natural leader, Daley recently led an effort to coordinate big-name scientists across several institutions on a collaborative grant to compare two types of stem cells—just one example of how he earned a reputation; he knows how to get different groups talking together in a constructive way.
He also says he wants Harvard Medical’s faculty, students, and staff to reflect the global community the school intends to serve, and that he promotes diversity in hiring for his 30-person lab.
Daley has a keen interest in sickle-cell anemia, which affects people of African descent, including African Americans, and he believes the federal government should invest in a moonshot effort to cure the disease.
Daley plans to continue teaching molecular medicine at Harvard Med after assuming his position as dean. He also plans to spend one day per week in his lab researching blood stem cells.
“It’s important for a dean to remain relevant by continuing to publish papers,” Daley says. “Plus, I just love science.”
Among his priorities is raising money. Despite its worldwide reputation, and its relative influence when it comes to landing federal grants, Harvard Med has seen annual deficits of between $31 million and $45 million for three consecutive years. Suggestions are being made for Harvard to rename its medical school in return for a billion-dollar donation. Daley only says that the idea would be worth considering down the road.
With opportunities for federal grants in decline, Daley says he sees an opportunity to bring in money from corporate partnerships.
For the stem cell research and medical community, Daley’s appointment as dean of Harvard Med is a fitting step toward validating regenerative medicine’s place as an authoritative leader in the future of medicine—one that’s been a long time coming.
Learn more about Dr. Daley here.